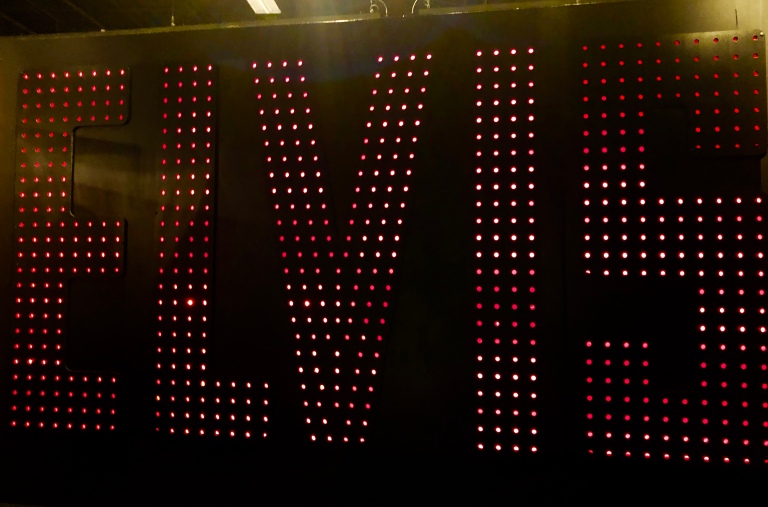 You can’t be a music lover without respecting or appreciating Elvis Presley and his music. Our visit to Graceland in Memphis followed our Nashville stop and was so illuminating about his life, family history and his accomplishments in music during such a short life.

We were reminded about his good looks, his easy smile and amazing poetic talent while waltzing through his home – his music in the background – viewing the eclectic furniture he loved and thousands of mementoes that are shared with his millions of fans. There was a certain reverence among the visitors like us – Graceland feels like a temple to his music and memory. We always wanted to visit here and were more impressed than we expected to be. We did the VIP tour with audio complement and saw the house, stables, awards rooms as well as costume and car collection.

We particularly enjoyed the early years exhibits and the movie displays – he appeared in more movies than we remembered and his musical talent as well as acting skills were remarkable.

Elvis and his family members are buried at Graceland in a respectful elegant setting. He was a dedicated family man who loved his family dearly and cared for all of them as they aged. His charitable works were amazing and his daughter Lisa continues them in his name today.

The mansion is well preserved and although somewhat grandiose, it still gives you a sense of his warmth and dedication to his family.

His concert costumes are beyond comparison – in my opinion, only Michael Jackson came close. It was cool to see so many of them and remember the songs you associated with that appearance.

I had forgotten how handsome he was and how vital his male sexuality was to his persona – you’d need to be a robot not to be affected by the smile, the lyrics and the hip swivel. He was an avid reader of everything but especially philosophy and religious works. You can see those influences in his poetry.

I took this picture of one of the news photographs taken while he served in Germany – even with the glare you can appreciate his composure and sweetness at a young 18 years old.

Oh yes the famous Pink Cadillac and it’s even cooler in person. Elvis loved cars deeply and has a fabulous collection from classics to Corvettes but this is my favorite.

More gold records than you can imagine………. 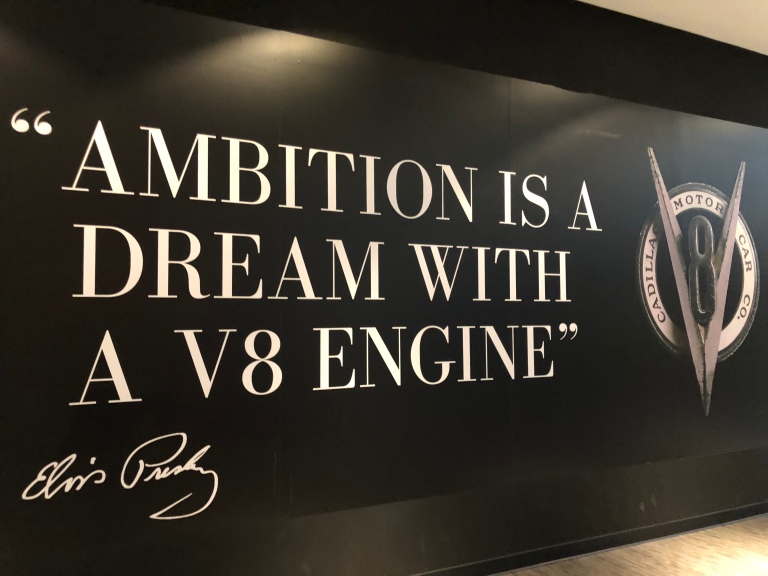 Loved this quote – it explains his determination early on to be the best he could be. Before illness and injuries that caused him constant pain, he was a force of nature in his efforts to succeed.

I couldn’t resist the Purple Caddy…..where do I get one?

The museum is staffed by a very diverse group of people – all local Memphis residents according to ones who we met – and it is clear that these Memphis residents still hold Elvis deeply in their hearts. He was a true son of this rural environment who came from very poor beginnings and proved that success was possible with hard work and a stunning talent.

This was a terrific museum and tour – we stayed in the RV Park adjacent to Graceland for a very reasonable amount – nothing elegant but very convenient especially because it was raining off and on while we were there. We thought it was so interesting and engaging – we were delighted that we had it on our 2019 itinerary.

We followed this visit with our stop in Little Rock, Arkansas and the Clinton Presidential Library, where another Son of rural roots is celebrated for his extraordinary achievements.