We planned a visit to Lynchburg to see the Jack Daniels Distillery and stayed at the Manchester KOA about 20 miles away. We did a dry tour (no tasting) first and the returned a second day for a tasting tour. This is the Mecca for all things Jack!

It’s very popular tourist stop and we picked the weekend when the Tennessee Squires gather for our visit. Although Rick is a Squire, we were not aware of the celebration until we arrived. However we did get discounts and special tour access as a result. We vowed to return some year to attend the dinner festivities. The Distillery and surrounding town is a great place to visit – the people are lovely, tours are very well done and the history of this famous spirit is all American. Our first tour guide was a third generation Jack Daniels employee Ashley, who hoped her daughter would follow. Clearly Jack is in their blood! 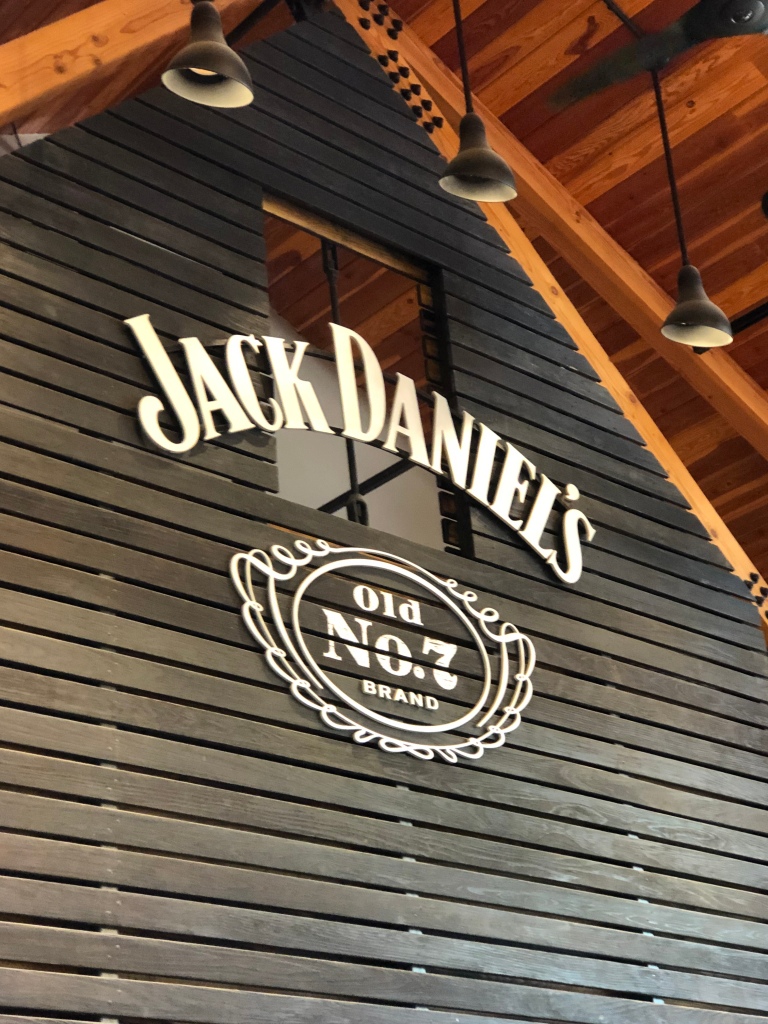 Jack Daniels learned distilling in these hills and hollows – and he never strayed far. Around 1864, at age thirteen Jack had learned to operate a still and wanted his own operation. He learned the distilling skill from a black freeman – Nearest Green – an employee of the preacher/whiskey maker who took Jack in as a youngster. Nearest’s son George left with Jack when he moved to Lynchburg to build his distillery. Green’s descendants still work with Jack Daniels Distillery today. Clearly it continues to be a labor of love. The story of Jack is remarkable for its struggles and strength of character – especially given the post Civil War society. Jack never married but loved a lot of ladies. It’s suggested that Number 7 refers to the number of ladies he loved. His nephews inherited the Distillery after his untimely death due to sepsis. By 1900s whiskey had become the “go to drink” nationwide, then along came Prohibition. During that period the Distillery sat idle and a hardware business kept things afloat.

Today the entire operation including all the barrel storage buildings are located in a dry county, but liquor can be purchased there because it is a tourist based operation – when you buy any liquor you are buying a fancy glass container that just happens to contain whiskey. Jack Daniels is only made here thus there is strict quality control. They use corn and other grain products from neighboring farms and the spring in the hollow has been the only source of water for distilling “Jack” from the beginning. Millions of bottles are shipped worldwide and there are several different types of whiskey made now but the tradition of old Number 7 remains consistent and strong. 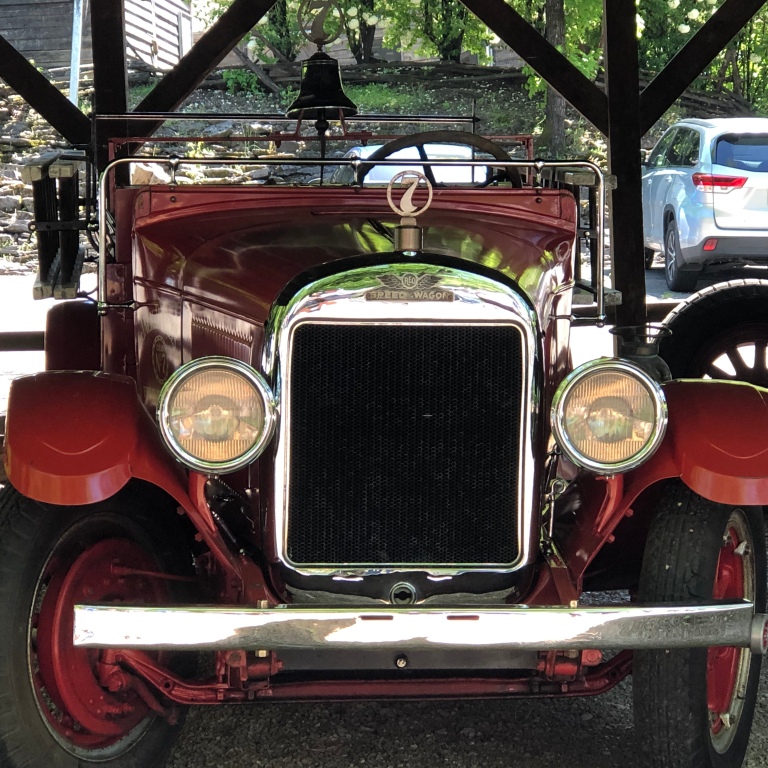 Burning large amounts of oak wood requires a fire apparatus just in case – this one is named after #7. 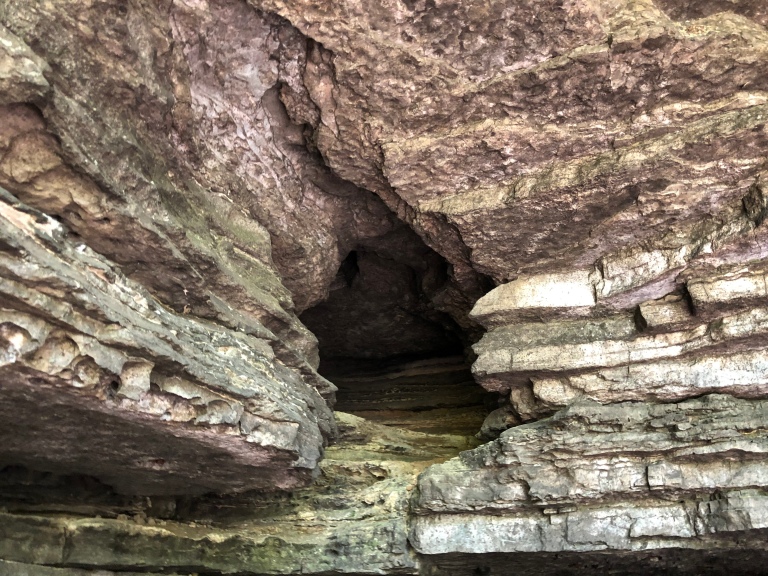 The spring in the hollow where Jack’s original spring water is sourced.

A short man, Jack had big dreams and a big personality – this statue stands in front of the original spring – water source. 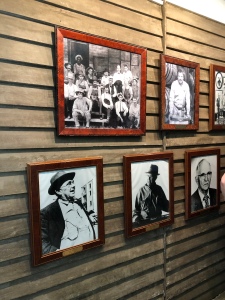 Some of the original family who worked in the Distillery. In the group photo on top – Jack is the only one standing in the photo with white hat and George Green is the black man top left. 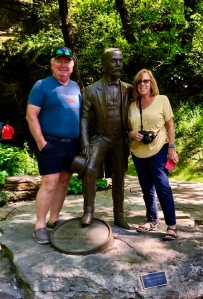 Gotta have a selfie with the man!

Barrels, barrels and more barrels – the distillery produces thousands everyday and after the appropriate aging period the liquor goes into the bottling plant.

All the barrels for aging the whiskey are still made here and these are some of the original tools used to assemble the barrels for their work in the vital aging period. 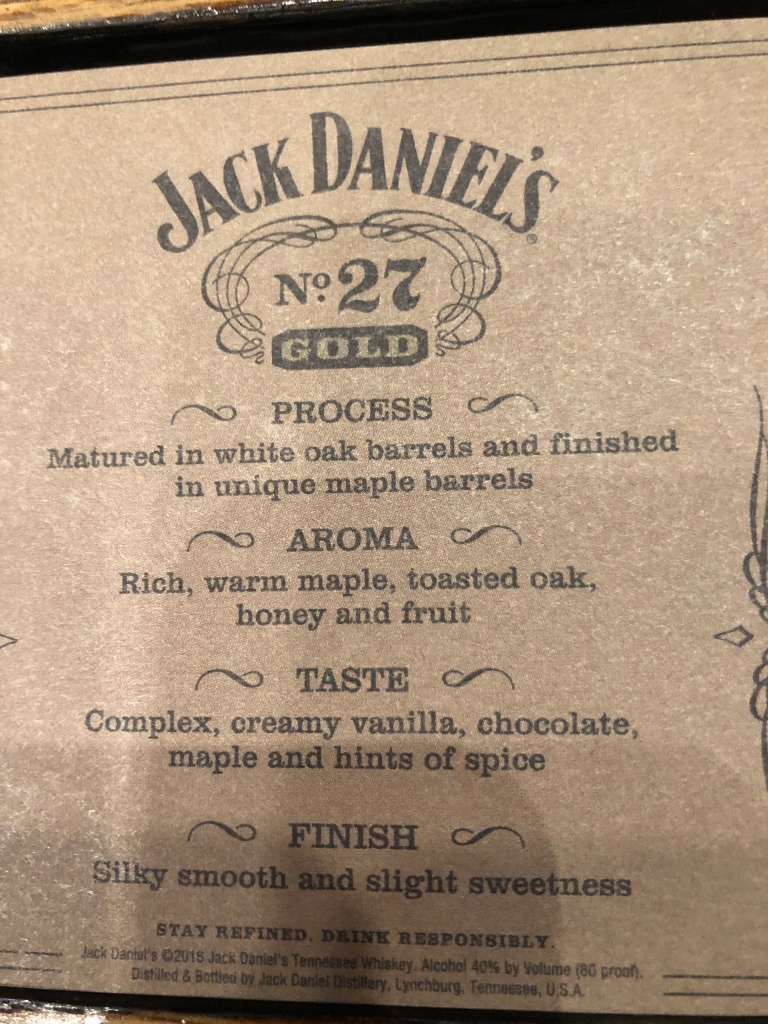 This is the finest premium whiskey – quite pricey but also especially smooth and aromatic.

Here is the Tennessee Squires house – a gathering place for Jack devotees! Originally the Len Motlow Home – Jacks nephew who inherited the Distillery.

Our tasting tour included samples of these different whiskeys – all were delightful and we bought a few to sample at home. We spent three days in Lynchburg – touring, sampling and enjoying the crazy vibe of Jack Daniel fans and devotees – white, black, brown or any mixture – those who came in BMWs, on motorcycles, hot rods, pickups or minivans and tour buses – from all around America as well as across the oceans – it’s a remarkable mixture of people from all walks of life. And they were all fun to meet and hang out with. We bought our Jack tee shirts and other gifts, vowing to return soon to whiskey’s American ground zero. 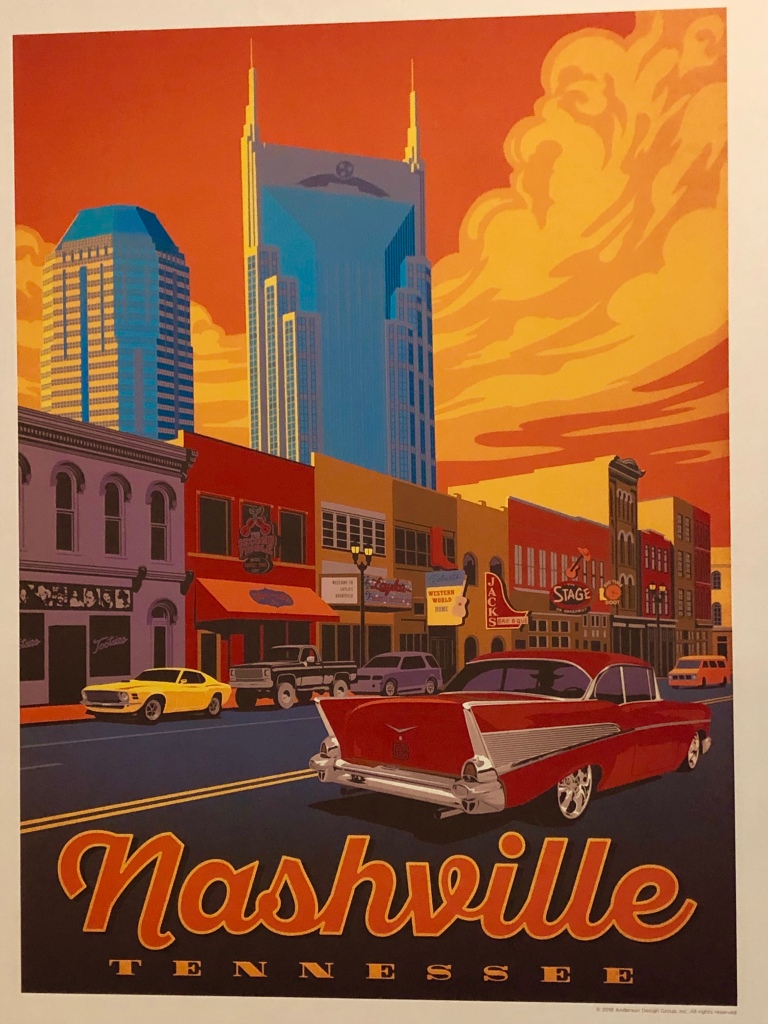 Just a bit more than one hundred miles north on the interstate is “Music City – Nashville – home of all things country music. We arrived at Safe Harbor RV Resort in the south east corner of metropolitan Nashville – to a beautiful site on a beautiful lake. This was easily one of the most beautiful spots we have stayed at.

The resort also has a shuttle that will take us downtown and pick us up later. My sister lives about twenty miles north so we will have them over and get up to their home while we are here. Nashville is so much bigger than it was twenty years ago on my last visit – I was eager to see the Hall of Fame and other historic places. Of course we knew the NFL Draft had just ended so we expected some inconvenience. Some 600,000 people attended the five day event – more than expected somewhat overwhelming the city. It bounced back but the River area where the stage was set up took longer to dismantle.

Our first day we took a two hour trolley guided tour to get the lay of the land. We always do that and it pays off by giving you a good introduction and an idea of which places you want to see in depth.

Looking south at the new convention center front designed to resemble a guitar toward the new all glass J W Marriott Hotel. The Country Music Hall of Fame is on the immediate left. 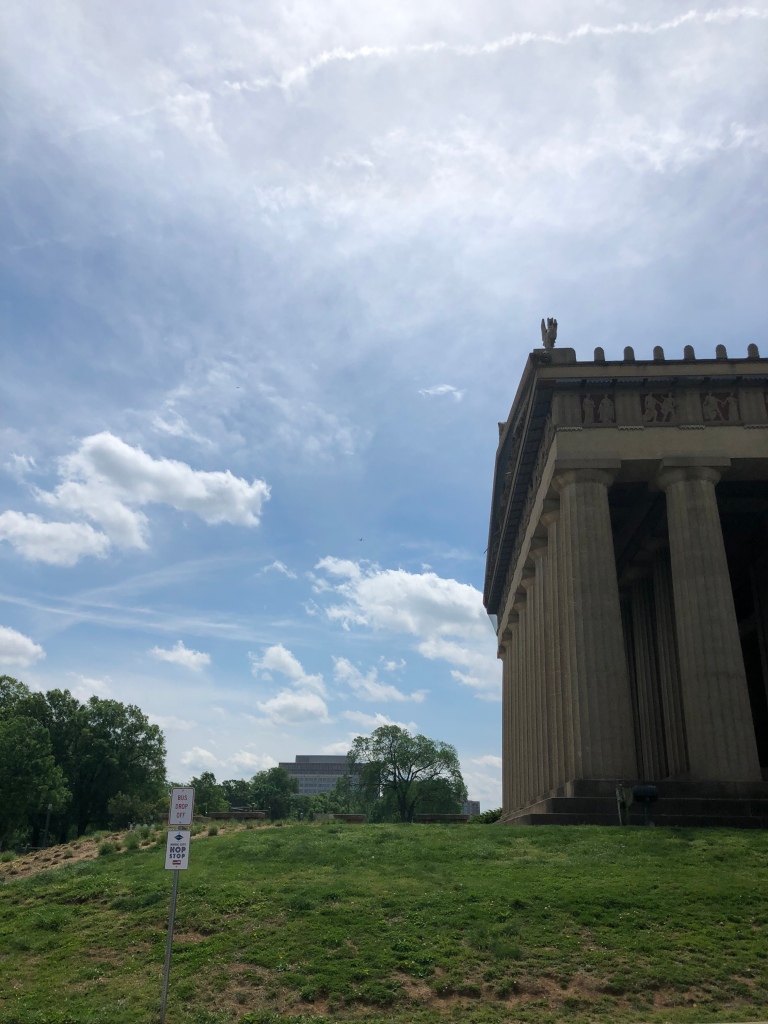 The Frist Art Museum is a stunning remodel of a former US Post Office that retained many Art Deco features making it a feast for the eyes before the artwork. We took time to see the Dorothea Lange Exhibit as I have long been a fan of her amazing iconic photos of America especially during during the depression.

The rose garden out front of the Frist needs no watering or sun……..complete with ants.

We visited the temple of country music – the Ryman Auditorium where country music had its infancy. It’s a temple not a venue , and you want to whisper when you talk inside its hallowed walls. It’s where the Grand Ole Oprah had its first performance home a well as where country music radio was broadcast from. The photo below gives you an idea of who has performed there. 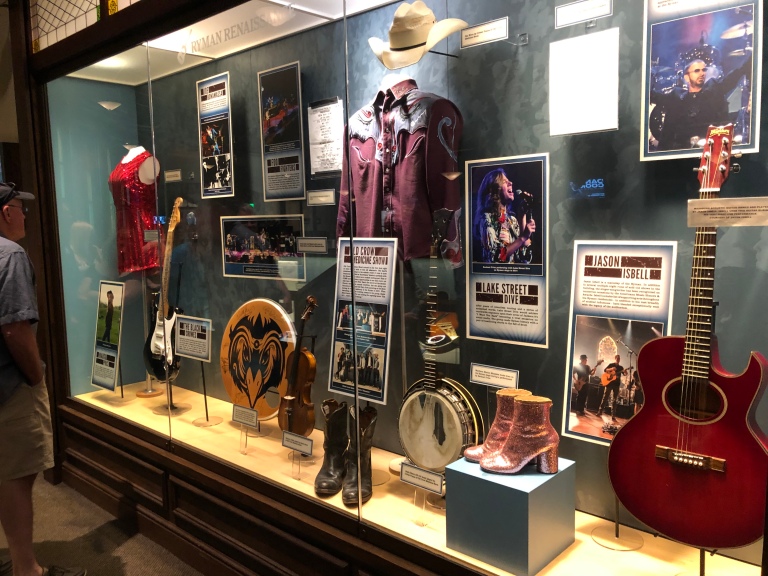 You can close your eyes and imagine any country artist busting out a tune on this stage. The stained glass contribute to the reverent chapel feel. 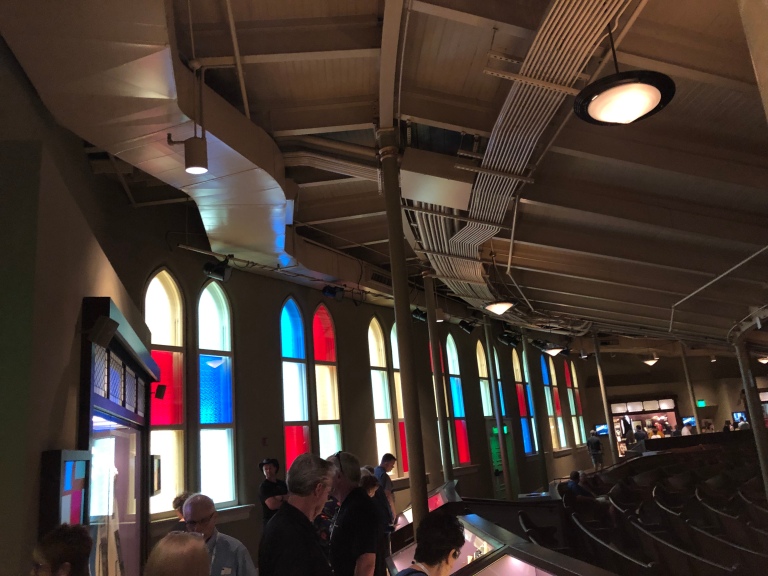 The Country Music Hall of Fame is enormous and wonderful. We wandered through all the exhibits and memorabilia with the sound of music in the background I want to tempt you to visit and go in person. It’s a dramatic building and jam packed on the inside. Give yourself two hours to really enjoy the exhibits. 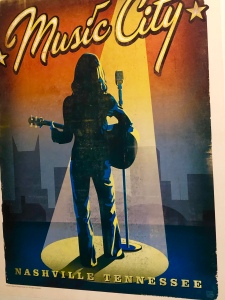 Not just country was born here – bluegrass debuted in 1945. 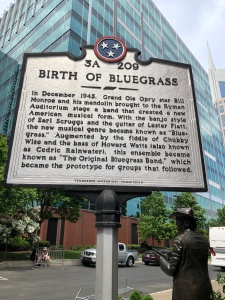 We had a fabulous guided tour of the famous “Studio B” RCA was the preeminent recording location and the tour gave us a peak into the past. The studio still does recordings and many current artists like Taylor Swift and in the past of course Elvis and other music royalty have used the old studio to record. You could feel the presence of musical ghost there. There was an X on the floor to mark where Elvis stood to record Heartbreak Hotel and the piano he used remains in the studio today. 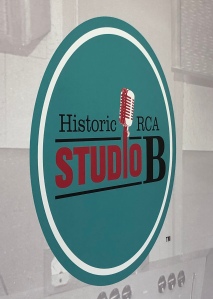 The Outlaws with their good record – Willie Nelson and Waylon Jennings early days.

Below the Skyline photo taken from the pedestrian bridge…..that crossed the Tennessee River. 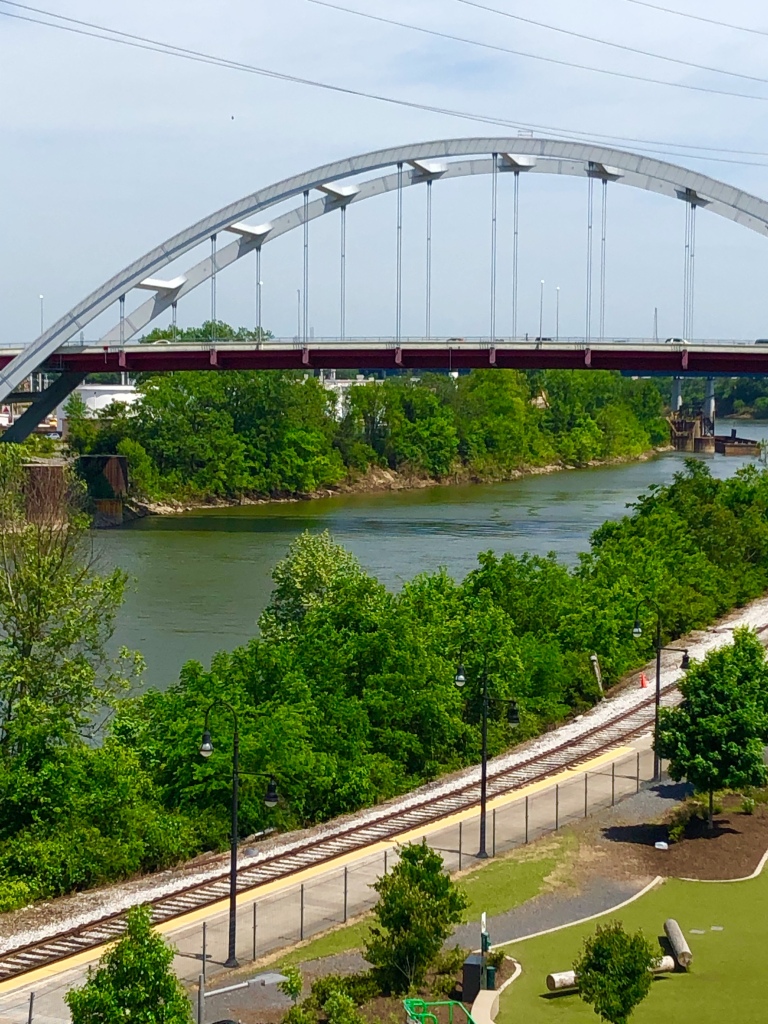 One of Luke Bryan’s places – delicious lunch after touring downtown, 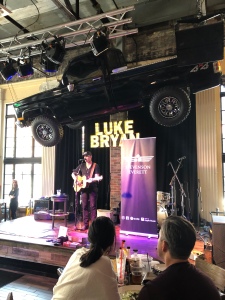 I loved the colors here as we walked by on Broadway – music is being played everywhere all day and into the night.

An sculpture that although originally controversial, has now been accepted and is often adorned with hats of local sports teams or other irreverent clothing 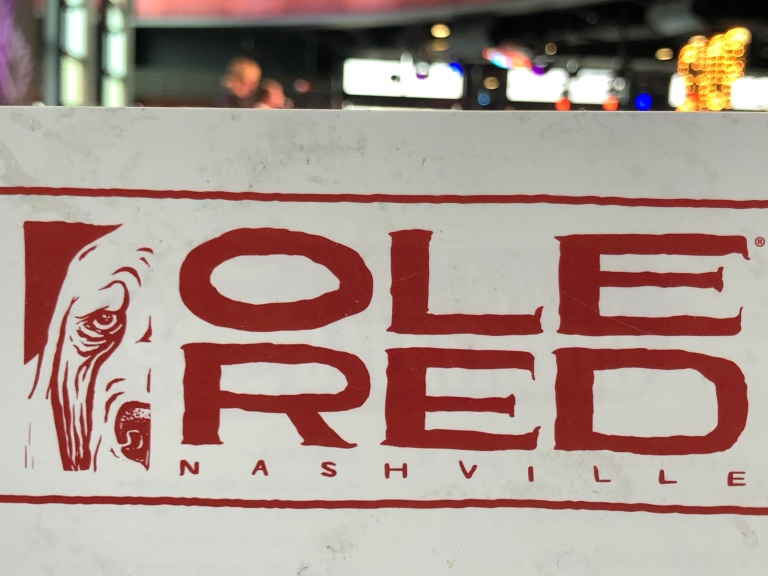 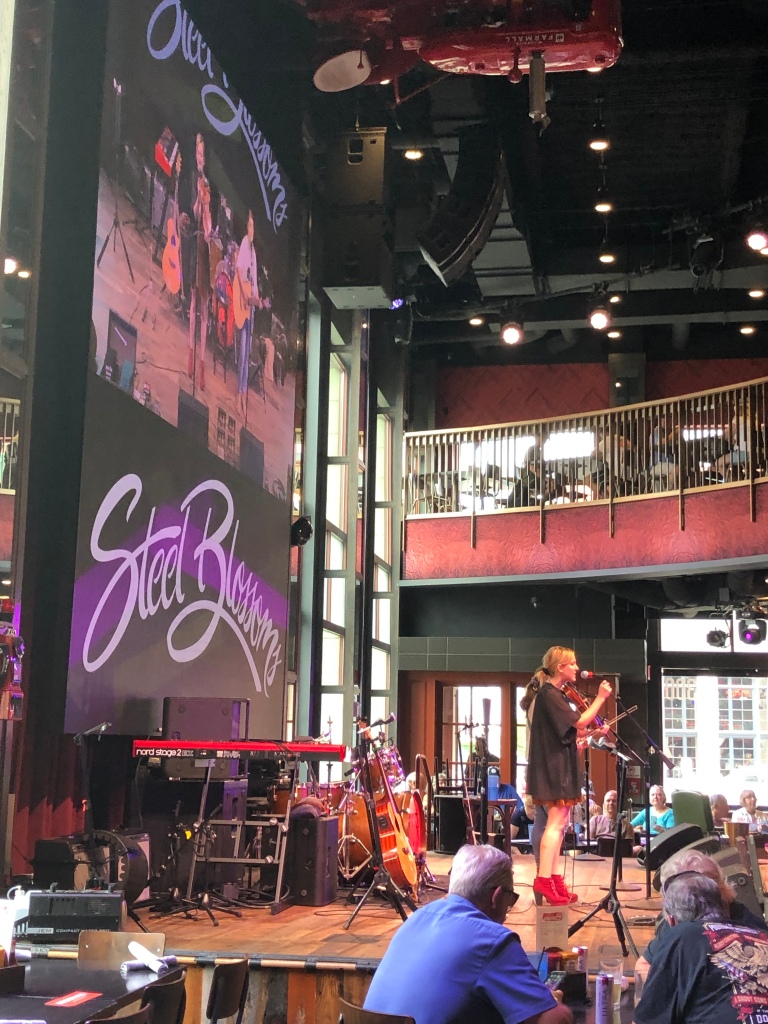 Before we bid Nashville goodbye we drove up to Bowling Green KY to visit the National Corvette Museum. A great take in and worth the 45 minute drive from Nashville. These iconic American sports cars are part of the fabric of America and who wouldn’t want one? We entered a drawing just in case it was our lucky day. 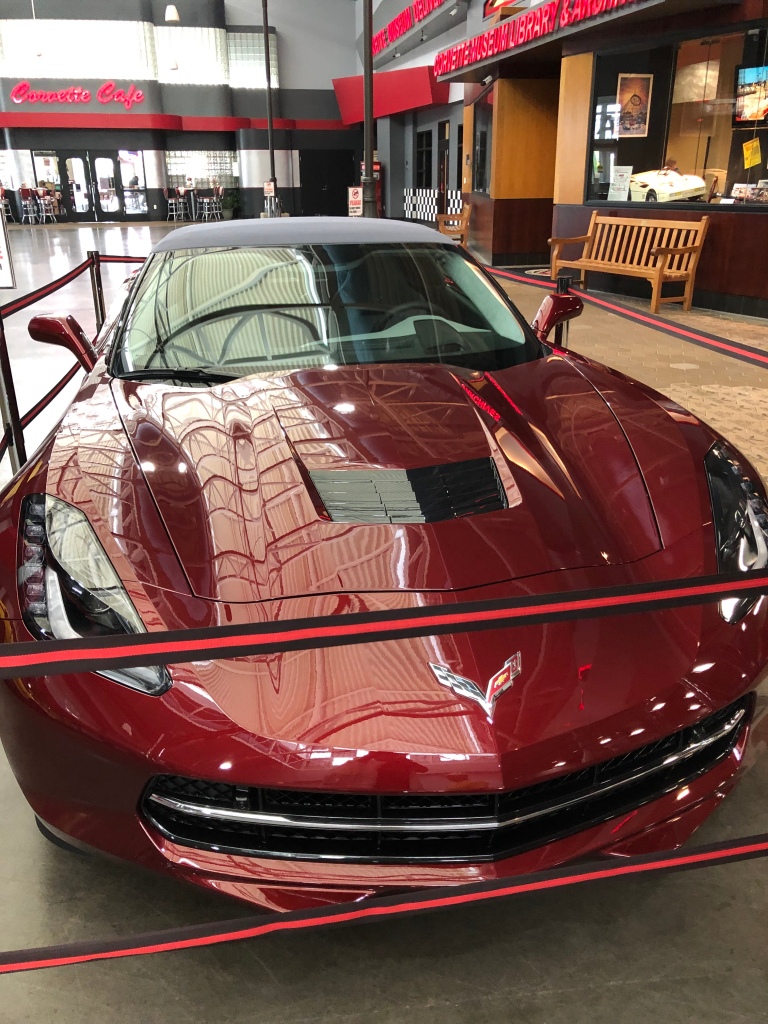 We entered the drawing contest to win this little beauty in August. 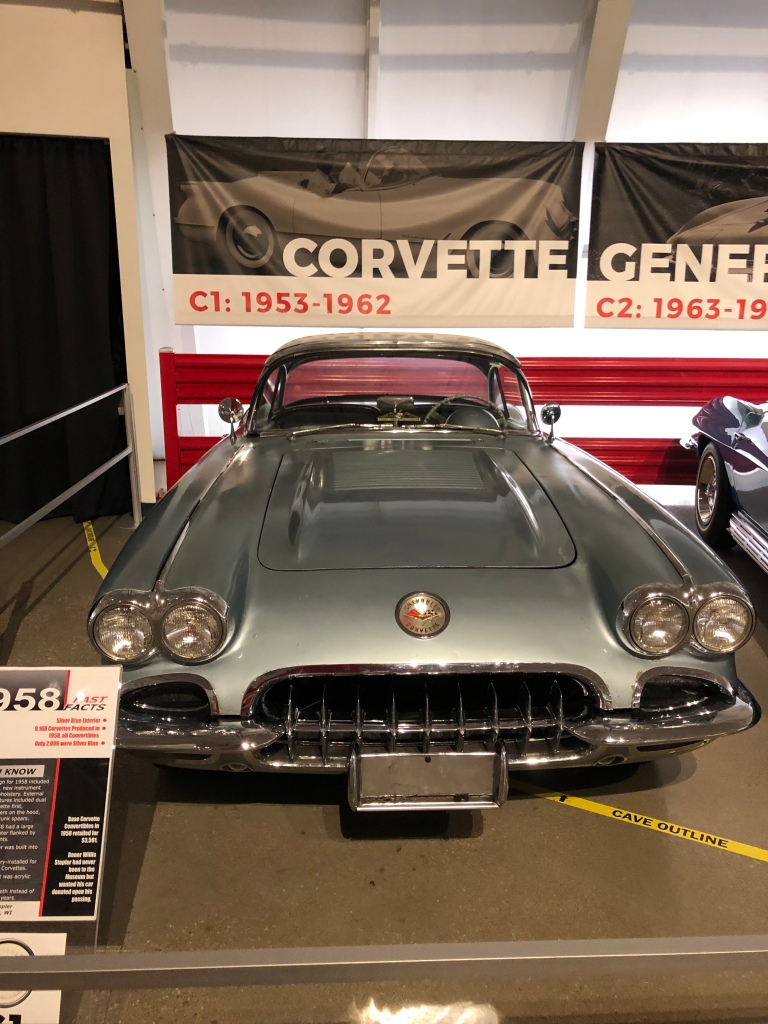 One of my favorite models. 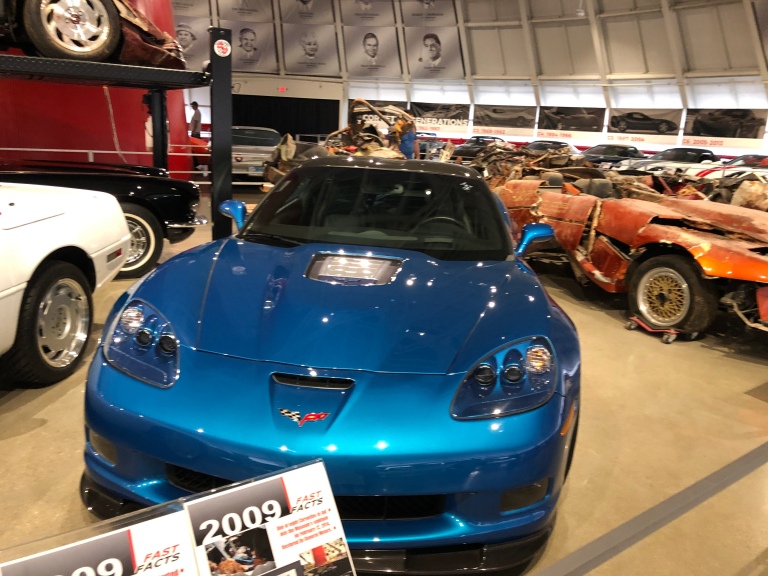 Cars recovered from the sinkhole that ate Vetted several years ago. Only two of the eight cars actually survived to run again but the museum felt it was important to let them remain on exhibit. The explanation of the accident and how sinkhole occur was excellent – a fabulous teaching moment.