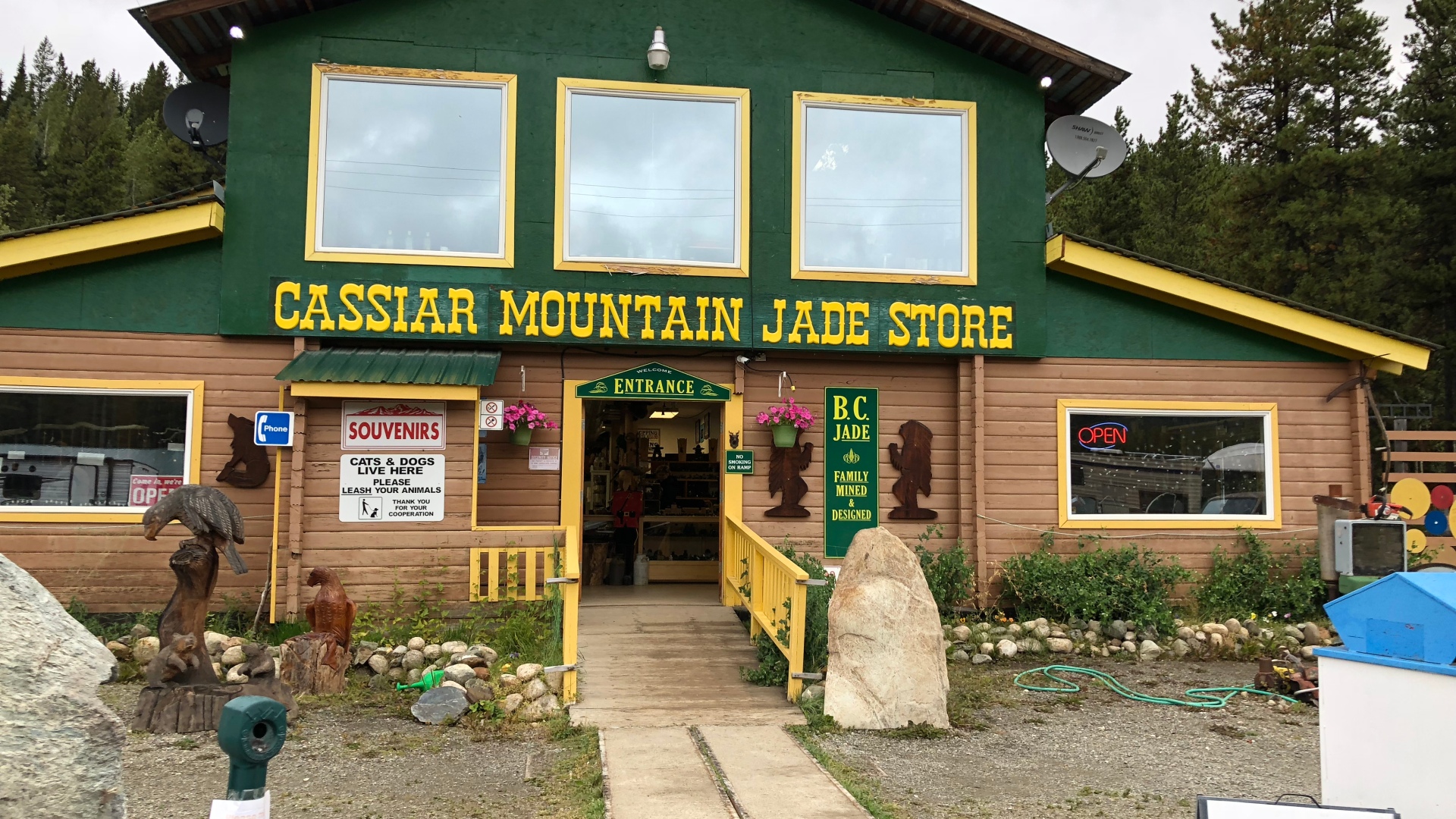 Jade is mined in the Yukon by First Nations tribes and sent to China & Japan for refining into jewelry.

Exhibits from a family museum in Anchorage are below.

The dolls in the photos below represent a variety of clothing made by the native people – for them using the entire animal once it was killed was important – and clothing was also seen as artwork and vital creative endeavor. 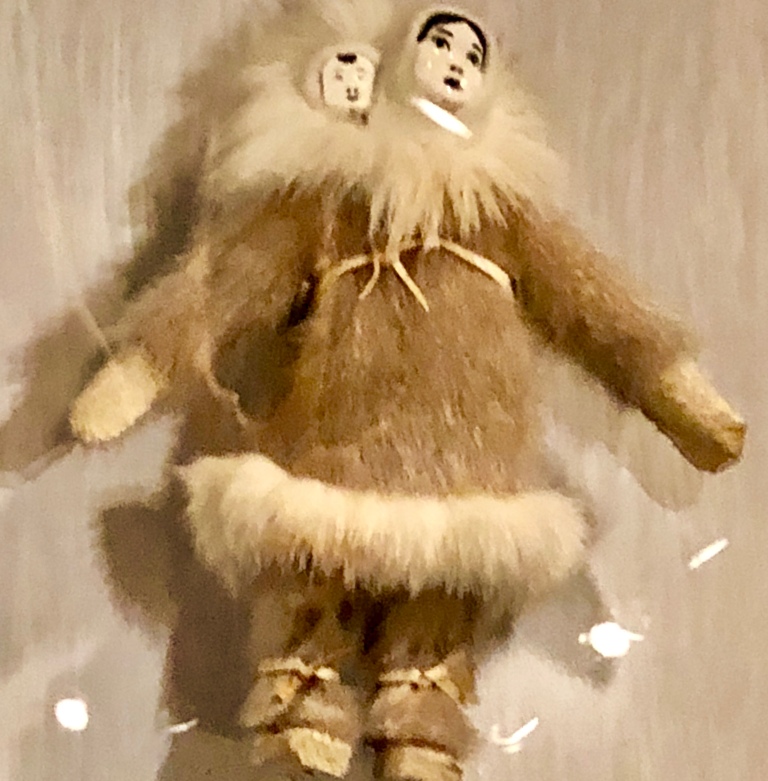 Woman with baby on back 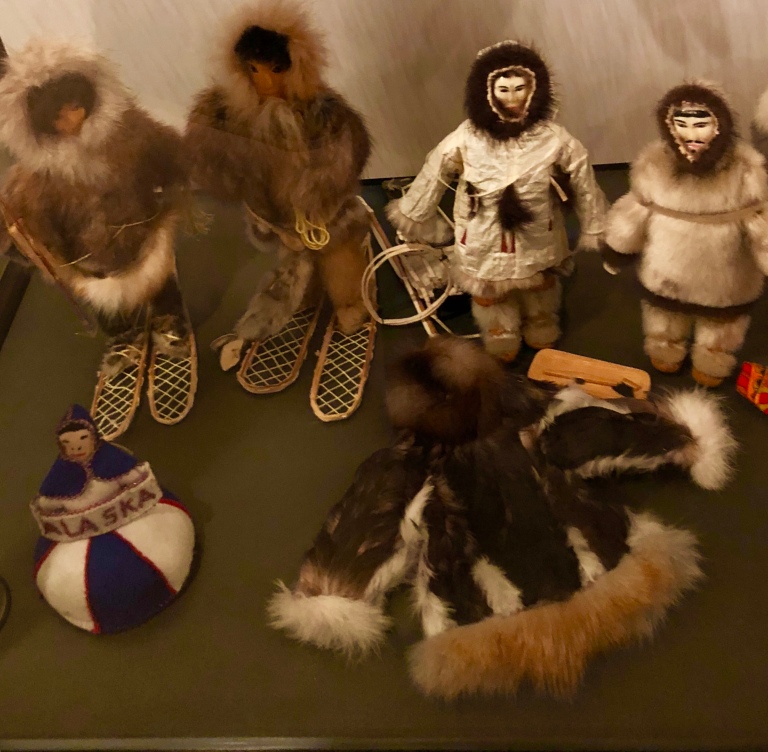 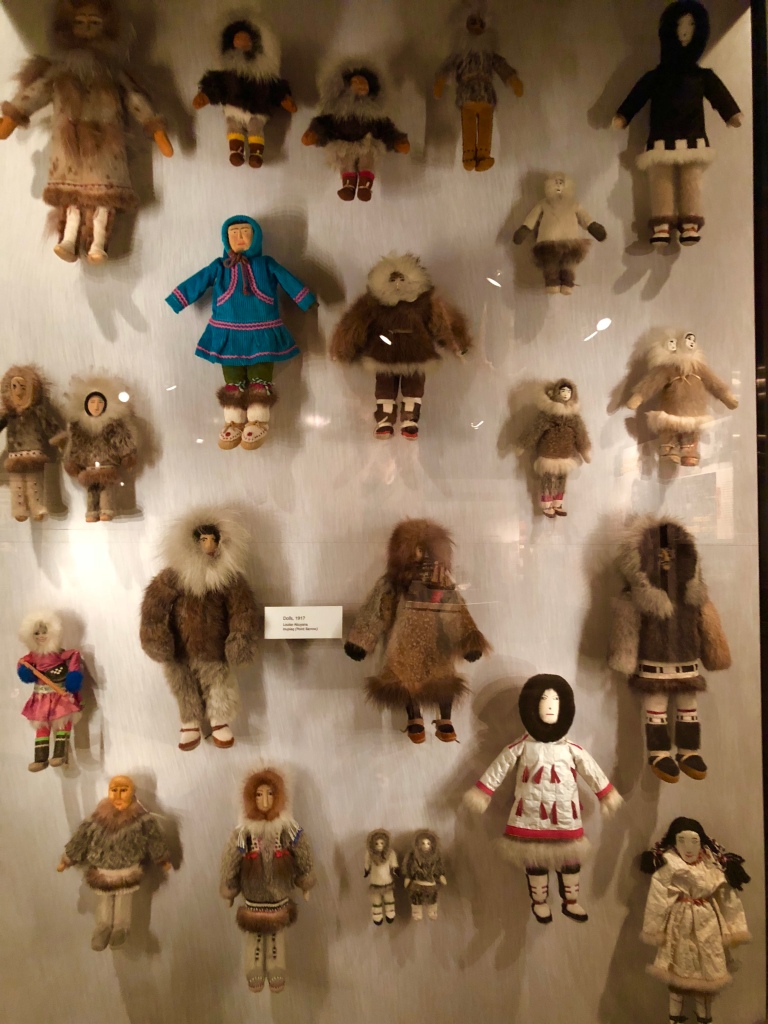 Typical dress for a whale hunt.

Two examples of tusk carvings representing sleds and the dogs that pulled them. 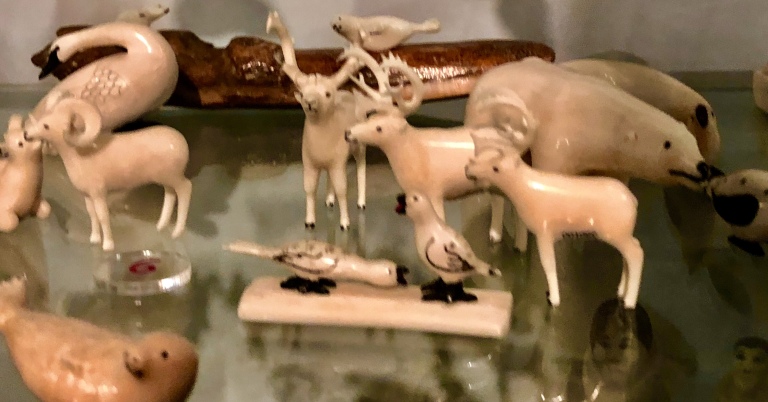 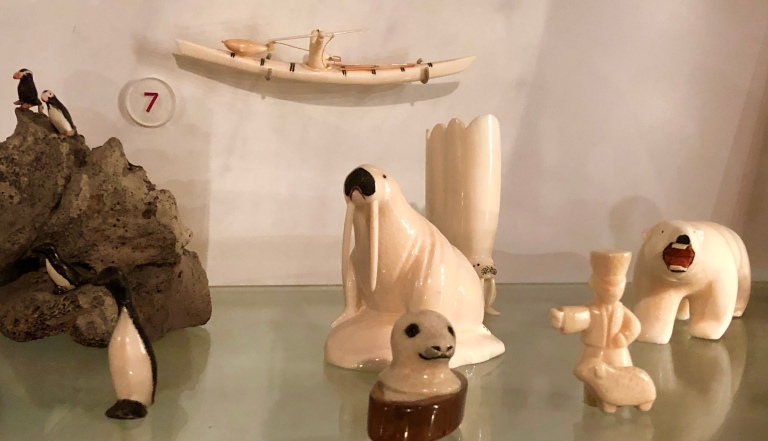 Above and below are photos of more carvings – some depicting the walrus and sea lions, polar bears and puffins.

Above are models of the fishing vessels used to catch fish and hunt whales in open ocean waters centuries before Europeans came to the Yukon and Alaska.

Models of creatures important to their native culture. and miniature families in large fishing boats as well as in their sleeping quarters.

A ceremonial hat widely used by early Alaskan people and written about by early explorers. 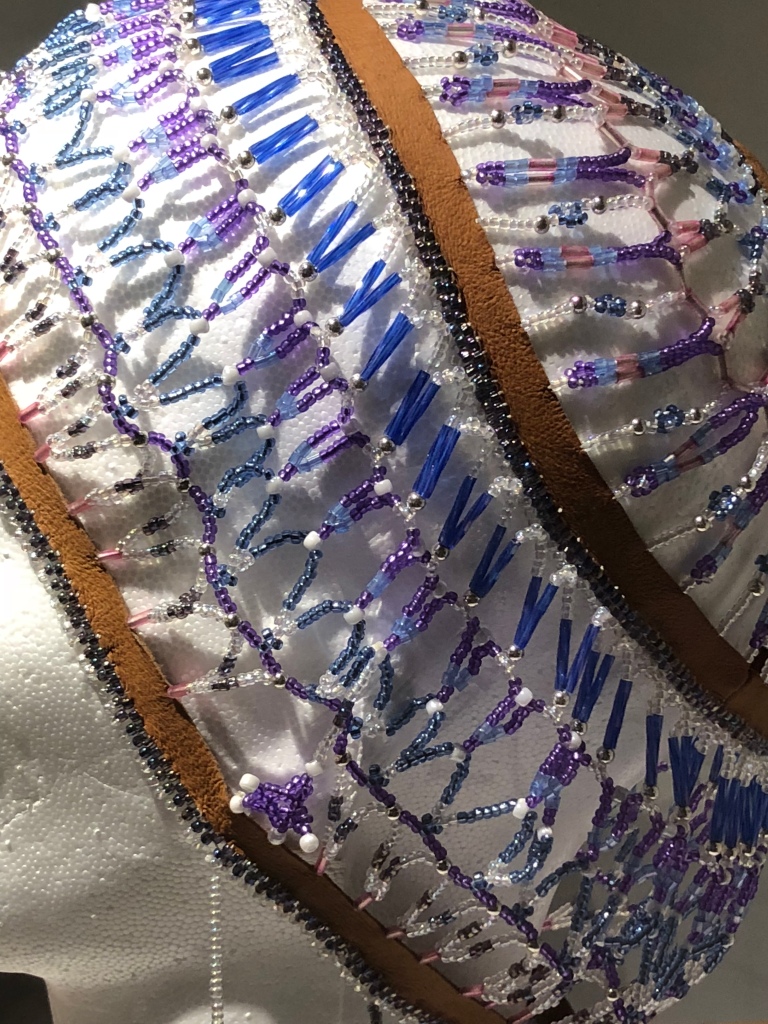 Blue beaded neck or head ornament highly valued because of rare blue colors. Beads were brought by Europeans to trade and their unique colors increased their value in native jewelry and clothing.

A beautiful sculpture found carved into the concrete at Alaska Museum – possibly a flounder.

In another small wildlife museum describing animals and birds of the Alaskan mainland as well as Aleutian Islands, we learned about the many unique bird species that thrived there and why they successfully mastered a such difficult environment.

Below Fox Island in the Kenai Fjords National Park was a neat retreat and a beautiful place to stop for a meal after puffin and whale watching all day. Even in the rain it was lovely. 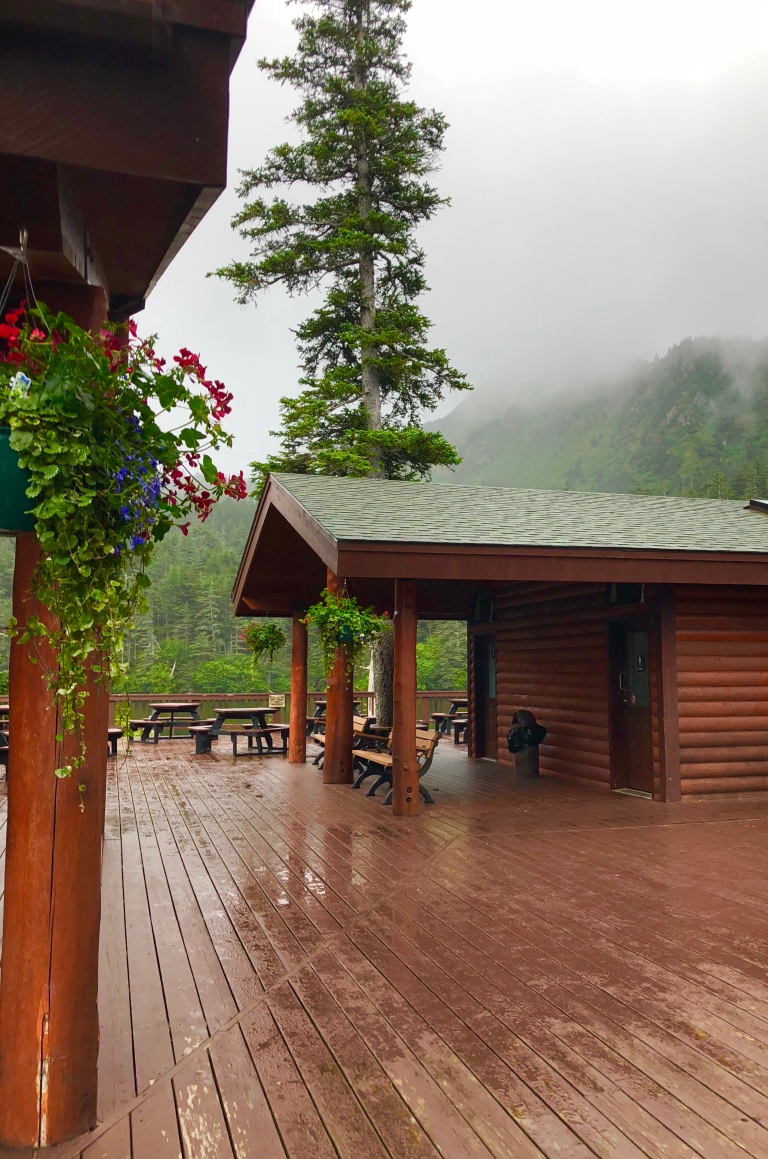 We visited another Alaskan Heritage Center to learn more about the native people in Alaska. The Center was beautifully designed with many outdoor exhibits of art and architecture. The museum was staffed by young Alaskans who were members of various tribes and happy to share their heritage with us. Below is an example of a native dwelling common among certain tribes – there are no igloos in the great North – that is a common misconception.

Homes were constructed of all kids of materials – wood, hides, branches, rocks etc. This beautiful dwelling was for ceremonies and gatherings.

A gorgeous wooden mask that I had to photograph. 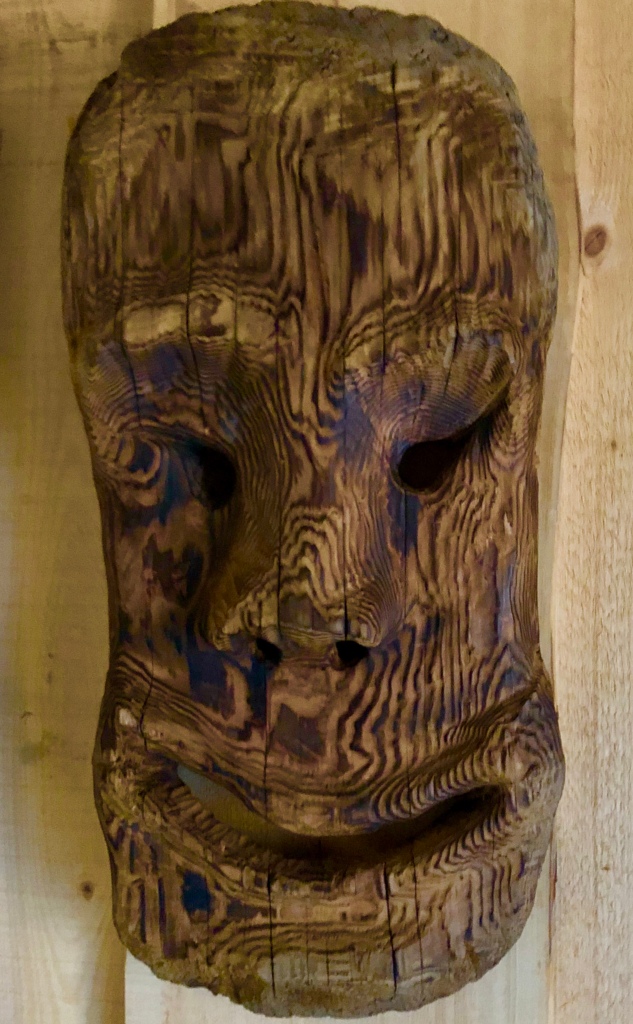 Hung high from the ceiling for storage this vessel structure would be covered in material each season for use. 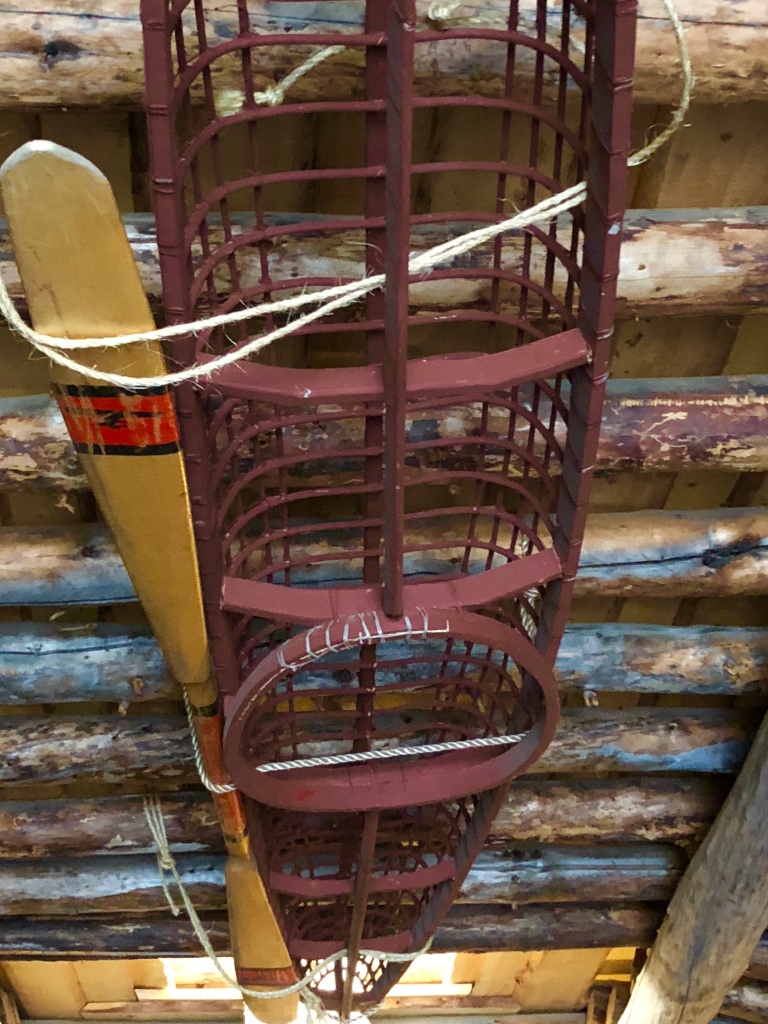 This Beautiful Mask hung in the ceremonial building included above. The second photo shows the inside of the building. 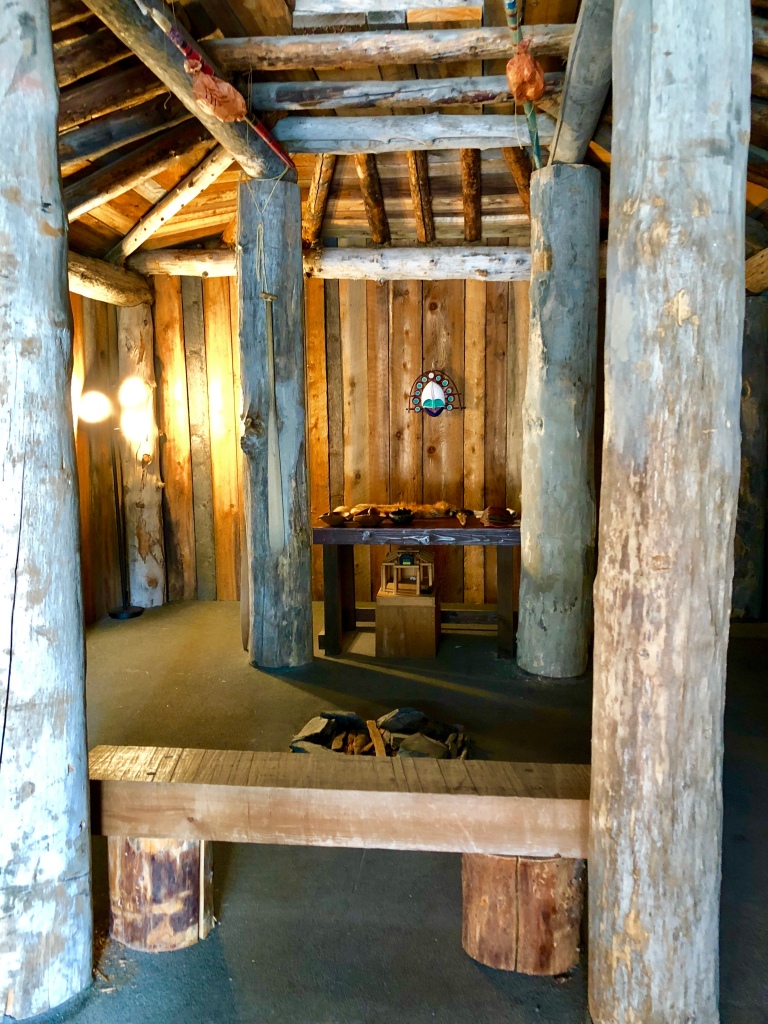 Grey whales were essential as food and and household goods.

This skeleton helps you understand just how big the Grey whales were.

Below Carvings in the doors to dwellings celebrate animals and birds that were sacred to the people. 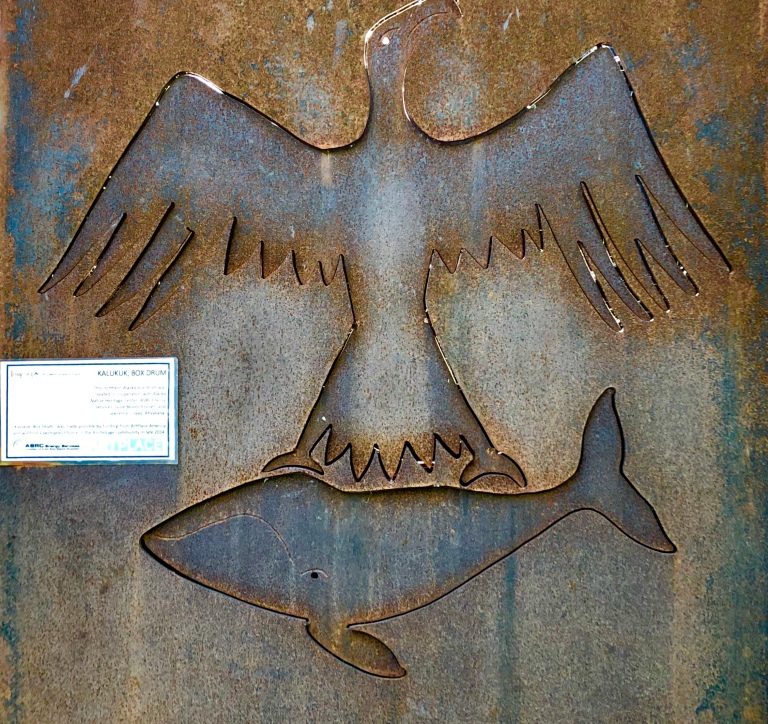 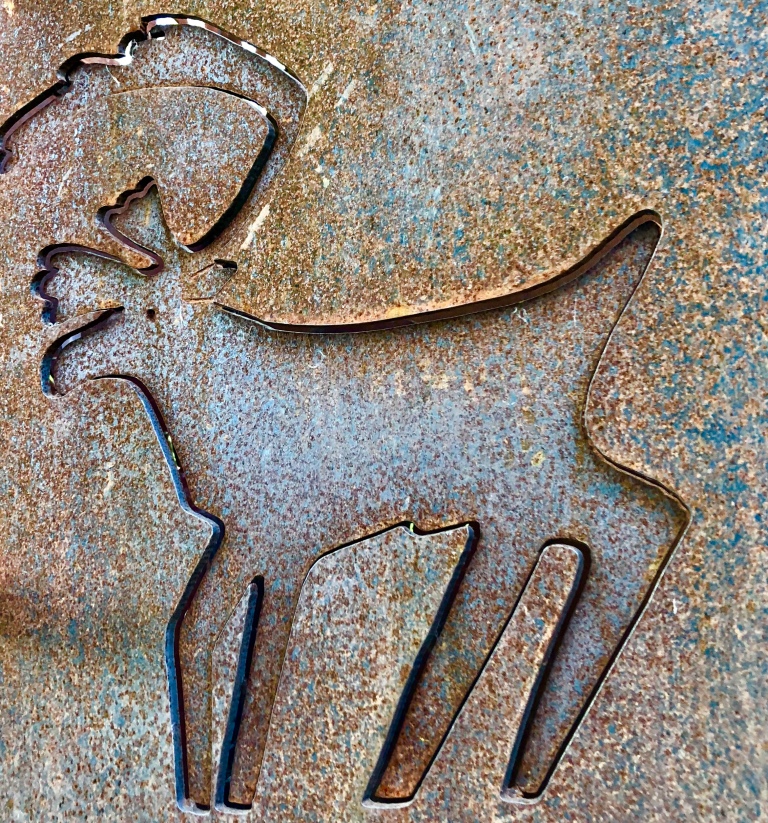 Below is a typical family dwelling built into the side of a hill – several such buildings would surround the family – one for people and one for food storage. These buildings covered with snow may have lead to the idea of the igloos.

One of the larger tribal nations were the Inuksuk – we learned about their music and art at this amazing native heritage center that celebrated the major native or first people as I like to call them. Salmon, halibut and other large ocean fish were vital to the native populations and were revered and respected as well as sources of food.

And now for some flower photos – the colors everywhere were staggering – clearly the few months that they bloom mean they take advantage of that brief warm weather and sun. The weather is moist as well with rain a frequent visitor. 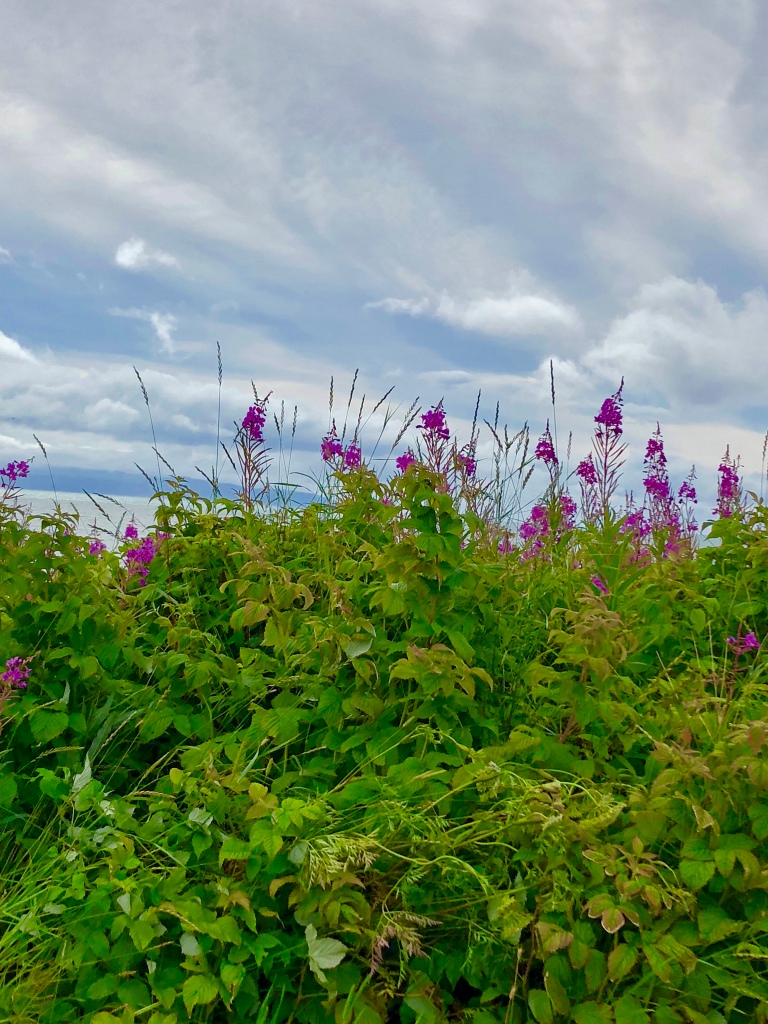 Fireweed blooms all through the Yukon and Alaska along highways and on hillsides and mountains. It got its name because it is the first flower to return after a forest fire. 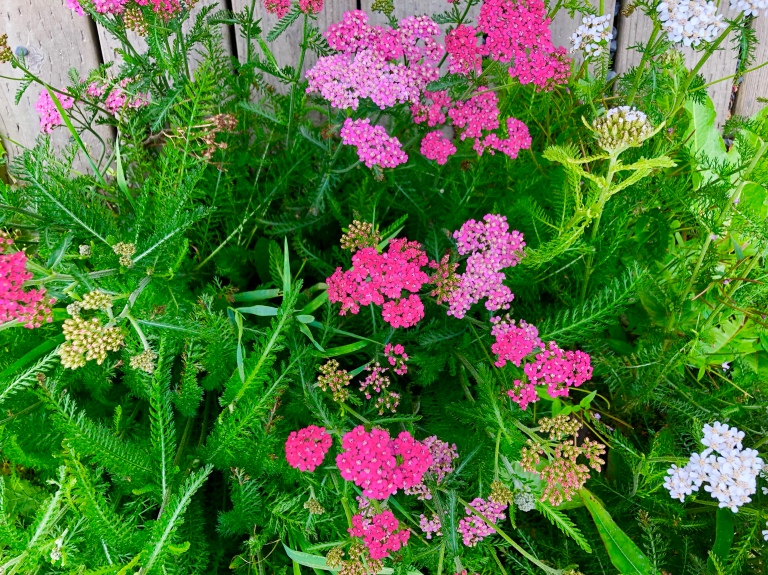 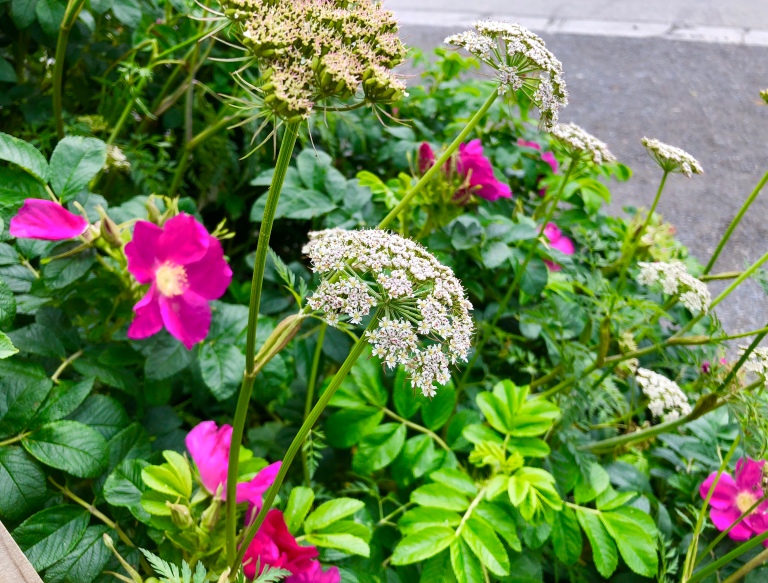 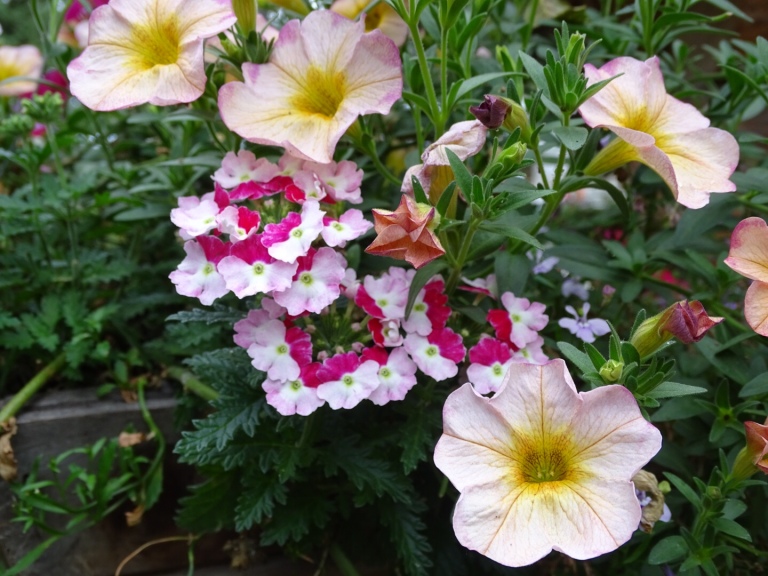 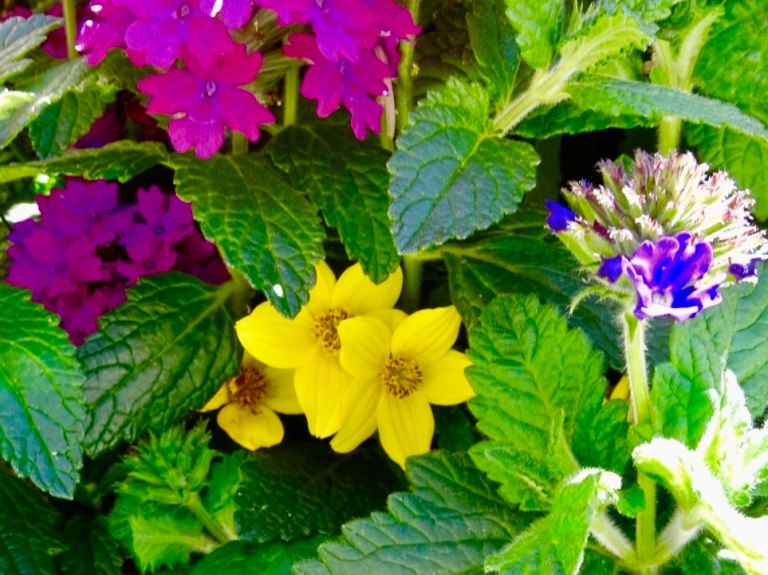 Wild strawberries and asters as well as sweet purple wildflowers.

We had a fabulous tour of the dredge – one of the original dredges responsible fir millions of ounces of gold in its day- and we got a chance to pan for Gold ourselves. We combined our flakes and I got a necklace!!! No photos inside but it was a cool experience. Lots of flowers here too benefiting from the sun and warm temperatures.

Here we are departing the gift shop at the Gold Dredge #8 after securing our gifts made from gold flakes we all panned ourselves.