Valdeeez not Valdez as in Juan Valdez, the Colombian coffee icon. A somewhat gloomy wet town when we visited, but another vital fishing location. Several ships from the “Deadliest Catch” TV show operate out of Valdez. It’s a great salmon and ocean fishing port depending on the season. Here too the glaciers drop into the sea and it’s a great place to witness that transformation. The wildlife of Alaska is abundant here with sea otters, sea lions, black and brown bears and bald eagles as well as huge flocks of sea gulls.

The road to this second seaport we visited was singular – deep curves with glaciers hovering above and the ever present mountains looming over it all. There were no other road options – like many other population centers in Alaska – there is one way into Valdez and one way out. 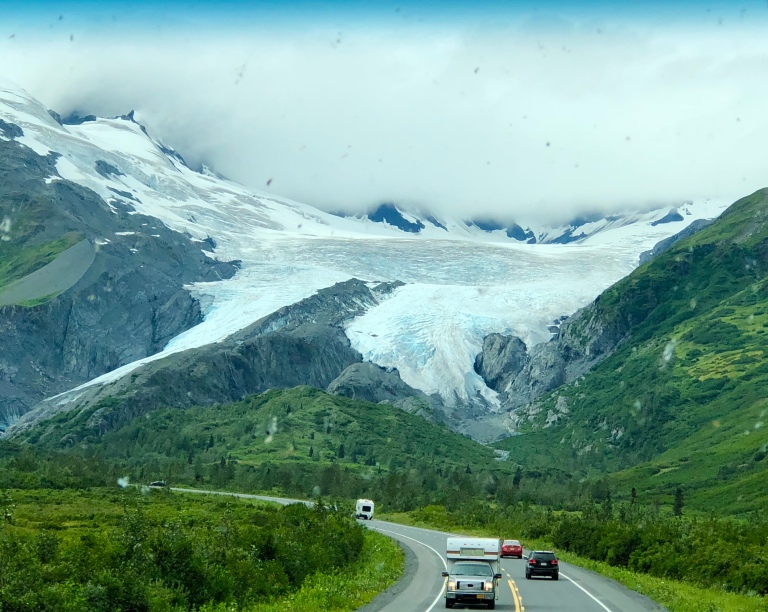 On the route to this seaport you pass mountains that are really volcanoes – some more dormant than others. Alaska is in the famous Ring of Fire and owes much of its rugged landscape to ancient volcanic activity and earthquakes as well as glacial events. Of course the height of the mountains Above is obvious given that the tops are above clouds – three to four mile high peaks are common with majestic Mount Denali being the highest at almost five miles high.

We were lucky enough to witness the salmon struggling upstream to lay their eggs – an annual event- in several locations along the coast and the event never failed to impress us. You could watch these amazing creatures for hours. Their determination is remarkable and stunning. Below you can see them swimming desperately toward shore and the spawning sites in the rivers. The fish ladders are where the strongest and most genetically promising fish survive and go on to produce the best populations going forward.

The spawning salmon also give off sperm which attracts hungry sea gulls and makes for amazing feeding frenzies. Below see the salmon swirling about in shallow water near the river entrances.

A photo of the harbor packed with all kinds of boats – a layer of fog in the morning gave it a mystical appearance – it is a beautiful place.

In springtime Valdez is called the Land of Waterfalls – surrounded by mountains that decorate the seacoast with 27 feet of average snowfall – the melting produces hundreds of waterfalls. Below are a few examples. 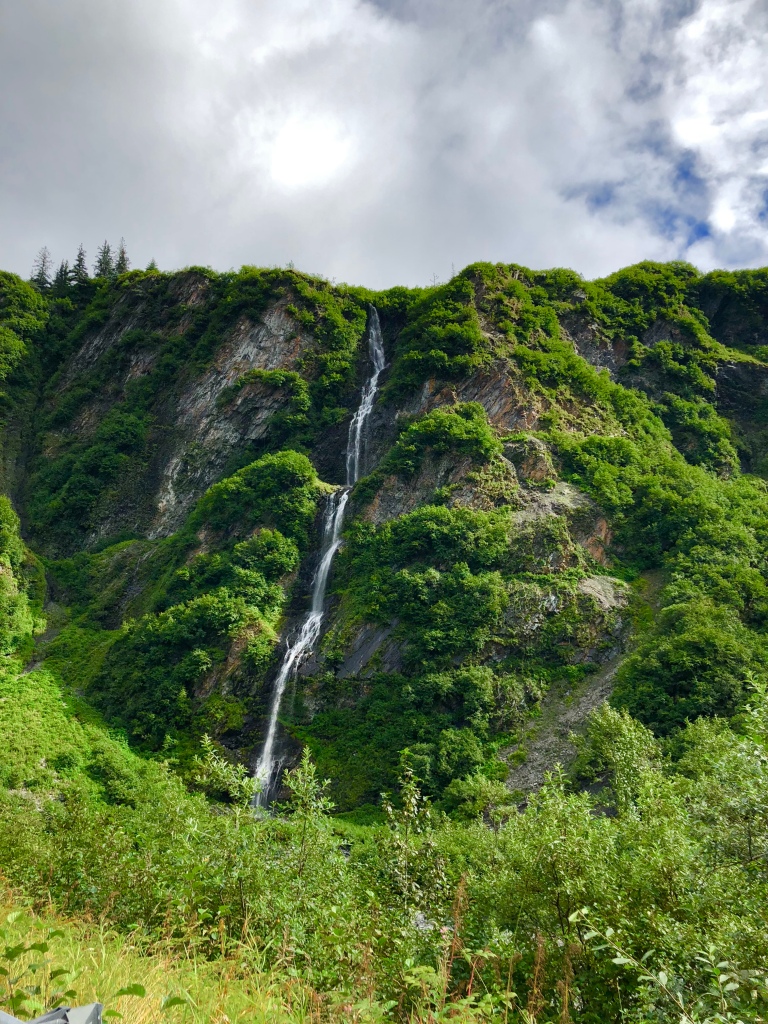 A tiny tan Alaskan Hare (related to rabbits but born with fur and mobile in 24 hours) was feasting on grass in front of the Valdez Museum and was not bothered by the human visitors at all.

Inside the Valdez Museum were artifacts and displays about Alaskan heritage, culture and history. In addition nearby is The Maxine and Jesse Whitney Museum and it should not be missed – it is funded by a local family with deep roots here and it has an enormous collection of native arts and products assembled by the family personally. We encourage folks to visit these small yet well organized museums in many of Alaska’s cities and towns- they were a huge resource for us. Although we read James Michner’s “Alaska” as a preparation for this trip, every cultural center and or historical museum added to our knowledge and understanding. Alaska’s complex history and rich native cultural heritage is fascinating and for us now it will be a life long pursuit.

Valdez is also famous as an oil port and a terminus for the Alaska Pipeline. Above is one of the processing plants where the crude is made ready for loading on huge tankers. The Exon Valdez oil disaster occurred near here decades ago and although it was a terrible environmental event, it has lead to a definite commitment to caring for Alaska’s environment. We were impressed by the apparent joint efforts of industry and conservation groups to protect and preserve her natural resources. 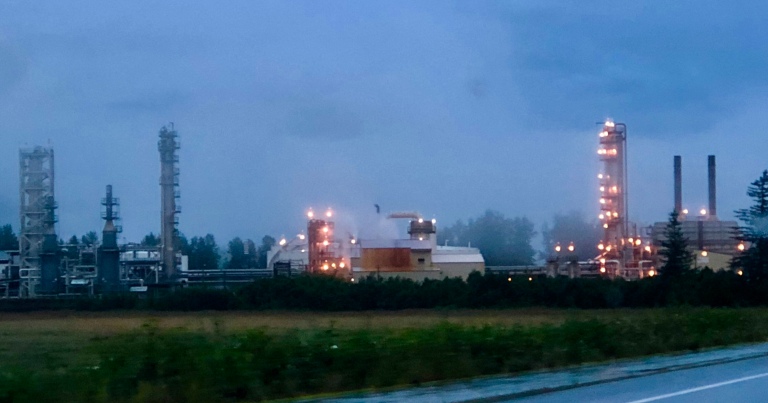 These bears below were feasting on salmon not far from the oil refinery and they were just a few of the dozens we saw while visiting the Valdez area.

Same bear finally notices us and wishes he brought his camera too.

And the bald eagles also enjoy salmon and these two below were perched high above the fish ladder pictured earlier where salmon were entering their path to breeding grounds – they were abundant and easy pickings for birds and bears. It was funny to see these splendid eagles literally everywhere in Alaska – the resident call them flying rats – they are abundant and often a nuisance at city trash sites but they are still glorious to watch and to photograph no matter how frequently.

Below sea gulls join in the frenzy as ocean going salmon return to swim back to their birthing areas to lay their eggs. Gulls feast on the fish that aren’t strong enough to complete the trip nThe salmon life cycle seems sad because when they finally reach home to reproduce – it’s over. But their three to five year lifespan is totally focused on reproduction. So if they make it home – their lives are successful and the circle is complete. We appreciated the opportunity to observe the cycle and treasured the experience.

The original city of Valdez was wiped out by the tsunami that accompanied the Great Alaskan or Good Friday Earthquake of 1964. It remains the most powerful earthquake in North America, second most in the world. It was felt as far south as California and tsunamis occurred throughout the Pacific Rim. Lasting 4-5 minutes with a magnitude of 9.2, damage by fissures, cracks and ruptures occurred as far north as Anchorage and all along the Alaskan seacoast. In Alaska, at least 139 people perished and there was $311 million in damages. Salt water roared across Valdez in heights up to ten feet – destroying shops, homes and fishing industry operations. Thirty two local people died as the city collapsed into the bay. The city was rebuilt on higher ground with guidance and technical support from engineers to help prevent a repeat disaster. The original site was at the edge of the bay and thus at risk for high water events. It’s worthwhile to visit to the site and museum to get an understanding of the devastation caused by a huge natural disaster that many of us do not often experience firsthand.

We met several interesting residents here – fishermen and women who fish to live – each year – they organize family fishing expeditions to secure enough salmon and halibut to last through the fall and winter – commercially provided food is very expensive in Alaska so this subsistence living is essential to their survival. It was fun meeting them and sharing stories of travel. Several couples talked about how they travel south in RVs to the lower forty-eight in fall to escape the bitter winters but always return to their beloved Alaska. We also met many people who had relocated north from lower states to Alaska – they said their previous states got too crowded – the call of the wild is strong here and we now understand it’s siren song.