The rally was held at the Winstar Casino & RV Resort – owners & operated by the Chickasaw Nation – this is one of the 18 casinos that this large Oklahoma based Native American tribe owns. They also own a healthcare company and numerous petroleum travel stops along major highways as well as operating a large cultural center off Rte 35. Their holdings are diverse and productive bringing in over $13 billion in annual income for the nation’s members.  Along with the Choctaw nation, they have a very strong & beneficial presence in Oklahoma.  Both were among the tribes relocated during the mid 1800’s from east of the Mississippi to reservations established by the US government. The “Trail of Tears” refers to their shared experiences during the time they were forcibly removed from their homelands.  A sad chapter in our history, but it appears that these two nations have made the best of a bad situation.  Both were originally based in lower half of the Louisiana Purchase territory – land deemed more aporopriate for easterners settlers. 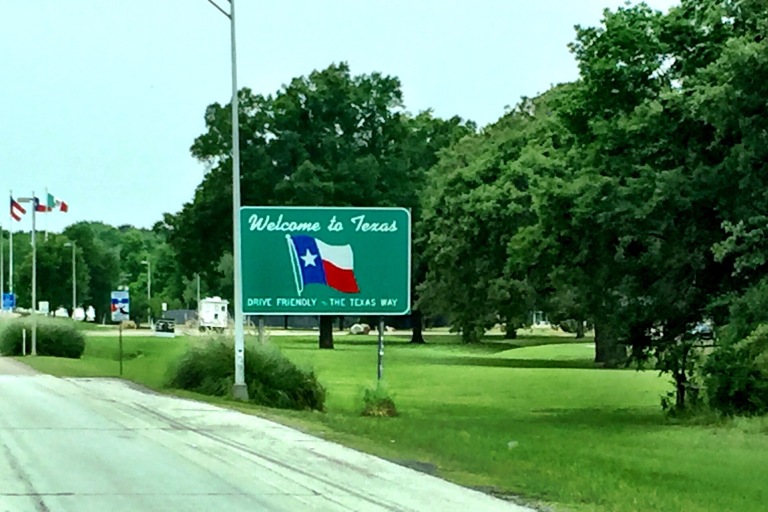 We met up with some old friends at this NIRVC rally – our first since buying our new motor coach.  Friends from North Carolina, Texas,  and Alberta, Canada joined us in the festivities and great local themed meals. This is a lovely RV Resort and has all the amenities you need. The weather was not great – we did have severe t-storm threats but dodged that bullet this time. For those that gamble this was a huge casino – says it’s the largest in the world. With areas themed as famous world cities,  it is filled with those seeking their fortune through risk and luck similar to the early settlers who came to this new land almost two hundred years ago.  There is a golf course as well as a spa which offers massage and facials – several of us sampled these offerings.

Lots of beautiful class A motorhomes lined up in the resort – most made by were Entegra, Newmar and  Tiffin.

Incredibly windy all the time we were there – Rick, Kathleen & our friend Jim with Lenny & Lola – photo by Steve, Jim’s partner.

We didn’t win any prizes during Saturday night’s Age of Aquarius themed party – these fellows did and we had a great time!

Said goodbye to all that night and got ready for a windy drive to Oklahoma City the next day.